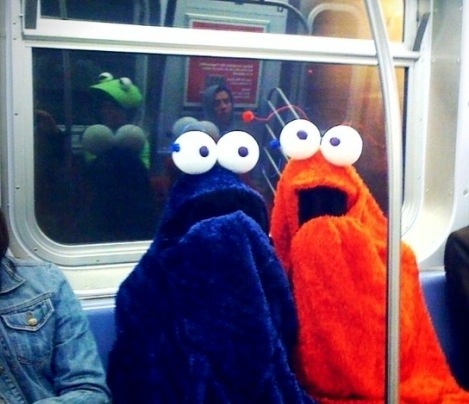 Working in the fashion industry for my fourth summer has challenged my commitment to the design realm, and has led me to serious moments of reconsideration regarding my career path. Thus far, alternate contenders include but are not limited to: cupcake connoisseur, columnist à la Sex and the City, or dancing lobster if the Amanda Show ever decides to make a miraculous comeback…a girl can dream, right?

If all else fails, I’ll pen a self-help guide, thoughtfully titled, Watch Yo’ Self: A Beginners Guide to Surviving (Physically, at Least) New York’s Mass Transit a System. A brief synopsis follows.

No 1. The golden rule: No eye contact. Not ever. Not under any desperate degree of curiosity or boredom.

No 2. Be. Aggressive. Be be aggressive. If you want to sit your sorry, tired ass down after a long day’s work, you better be prepared to fight for it. This requires some serious body language surveillance to determine who’s about to jump ship (or should I say train). Once a vacancy has been targeted, the struggle ensues. In this instance, it is still TBD whether or not violation of the Golden Rule is justifiable in order to fend off viable competitors.

No 3. The Golden Rule, part II. While passing the time between stops, always refrain from establishing eye contact with those waiting at the platform. If you’re as lucky as I am, you may pick up a new boyfriend- a balding, elderly Italian man eagerly attempting to join you on the train before the closing doors have the chance to crush his dreams, and perhaps his elderly heart.

No 4. Do what the cool kids do. Read the advertisements on the train- generally uplifting tidbits about falling into the subway tracks or having belongings stolen, with the same diligence as you would a Jane Austen novel. Subway riders read these ads as if their lives depended on it for lack of more stimulating entertainment and fear of attracting unwanted attention from the more….eccentric passengers.

While I did not take the introductory photo, sadly this live Jim Henson scene would not surprise me in the least.
Image sources: jasonrosenbergrealestate.com