In three short days, my whirlwind romance with Brooklyn will meet an abrupt end as I relocate to the Webster Women’s Residence in Hell’s Kitchen, fondly dubbed “the Spinster Apartments”. As much as I eagerly anticipate poking at cold meatloaf drenched in gravy in a musky cafeteria, likely being taken up as a prison wife, and scurrying home after late nights at work to avoid breaking curfew like a 14 year old, it’s safe to say that I will miss my current homestead.

Figure 1: A prototype of my overwhelmingly large room at the Webster Not for Profit Women’s Dormitory (muumuu-sporting roommate not included), which clearly appears to be cut out for the next season of MTV Cribs. Currently considering investing in a bonnet and changing my name to Geraldine.

While I should be eager to carry out my Manhattan dreams à la Carrie Bradshaw as planned, I would gladly trade fabulous tulle tutus and the flaming red sole of Christian Louboutin in for fugly skirt-suits and a weird, ginger crop cut if it ensured my stay as a Brooklyn local.

Exiting the subway station practically located at the foot of my bougie Brooklyn Heights dorm building is a breath of fresh air– literally. The foul smell of the city, a distinctly appetizing scent of garbage, human waste, and sewage, all exacerbated by stifling humidity, quickly dissipates the minute I cross the threshold dividing Manhattan from my charming Mr. Rogers neighborhood. In this magical land, squishy-faced pugs and frenchies stroll alongside their hip owners, college-tee clad interns dominate the cafe-lined streets, and on a particularly good day, Lena Dunham can be spotted on Montague Street, Haagen Daaz milkshake in hand.

Besides my immediate neighborhood, each of Brooklyn’s inner enclaves loudly boasts its own song, much like many of its boom box-blasting residents. I have had the pleasure of exploring a smattering of the many regions that Brooklyn has to offer– Downtown, Williamsburg, and DUMBO, each of which tells its own story of culture and history.

During the past two weekends and on a jog earlier this morning, I explored DUMBO, an acronym which represents Down Under the Manhattan Bridge Overpass (rather than the large, flying elephant, naturally).While my heart is torn between every region of Brooklyn I was lucky enough to tour, I found myself most inclined to return to DUMBO whenever time allowed. This historic district houses hip art galleries juxtaposed alongside 19th century factories, the famed Brooklyn Ice Cream Factory which perches at the edge of a pier with a priceless view of the Manhattan skyline, the landmark River Cafe- the most romantic restaurant in all of New York City (naturally the eatery of choice for my thuper romantic birthday date with my mom), and my personal fave…the weekly food festival, Smorgasburg at Pier 6. 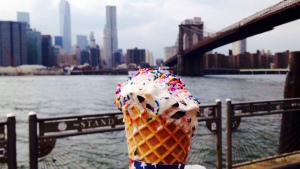 A fat cone from the Brooklyn Ice Cream Factory. If this isn’t ‘Murika right here, then I don’t know what is 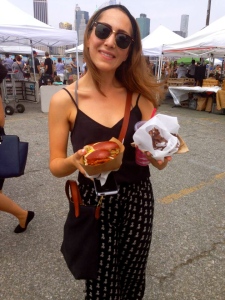 I will miss Brooklyn dearly, but until I’m able to return to my first NY love, it’s time to put my Carrie Bradshaw shoes on and invest in some blister band-aids.

The ah-mazing view of the skyline from Brooklyn Heights. 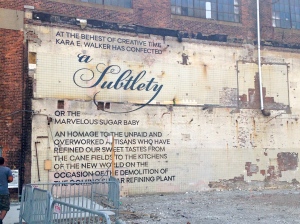 …Gave a new meaning to sugar tits for sure.

Indie as junk graffiti art in Williamsburg…Can’t even pretend to deny that I love it.